I started blogging about six years ago, in the summer of 2014. There isn’t much record left of what my blog looked like then, but I dug up the few screenshots I have left this week. At the end of 2014, my blog, which was also my first programming project, looked like this. 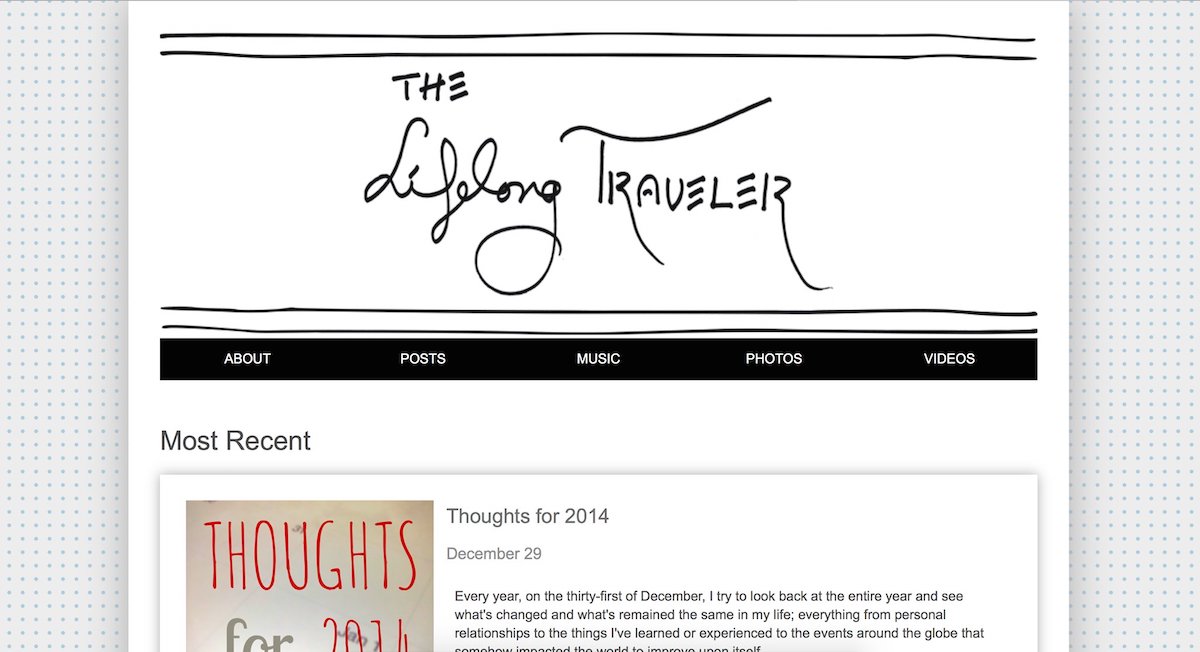 Around a year later, as a better developer with a more refined design taste, I spent the holiday break rewriting my website from scratch. At the time, my blog was about many more things than it is today – videos, original music, photography, art, and of course, writing. I still do those things in 2020, but my blog is a more focused place. As of late 2015, my website looked like this. 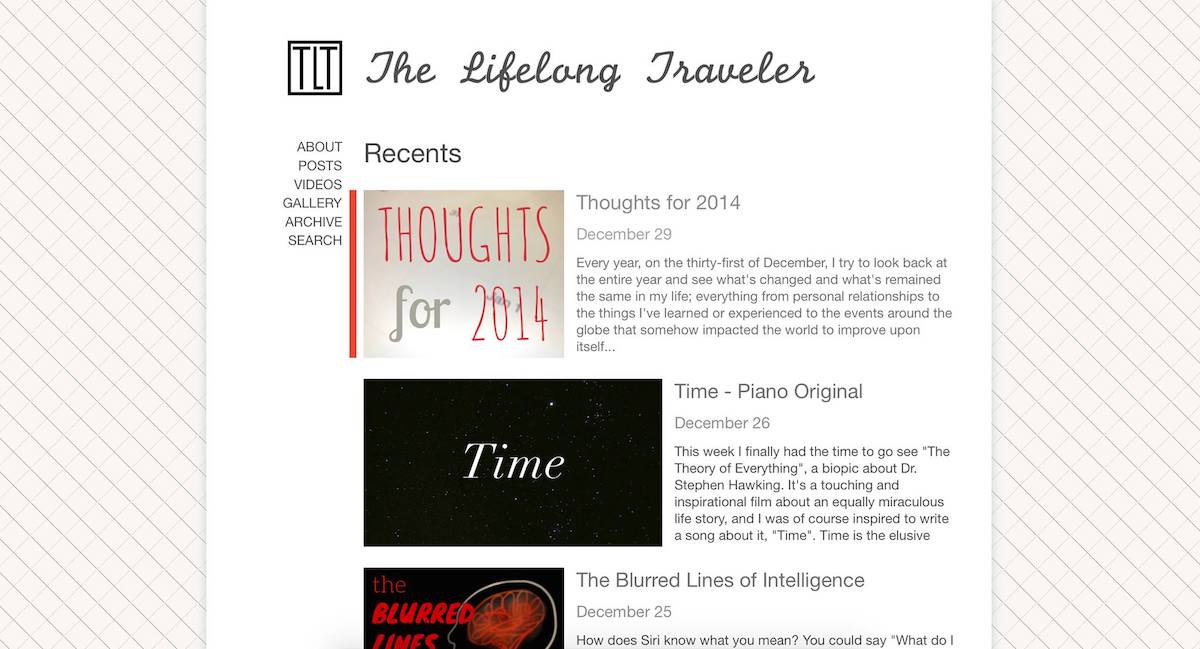 This second design lasted quite a while, almost a half decade, before I felt the need to rebuild it. It had too many sections, was tedious to update as my life changed, and in the intervening five years I had become a much better developer with a better sense of who I wanted to become through my words.

This website is only its third version. Although this third design is the design on which you’re reading my words at time of writing, with almost certainty, I can say this won’t be the last version of my website to exist. So, for sake of remembering, for a future where these words will be read on a different medium, the current website looks like this today. 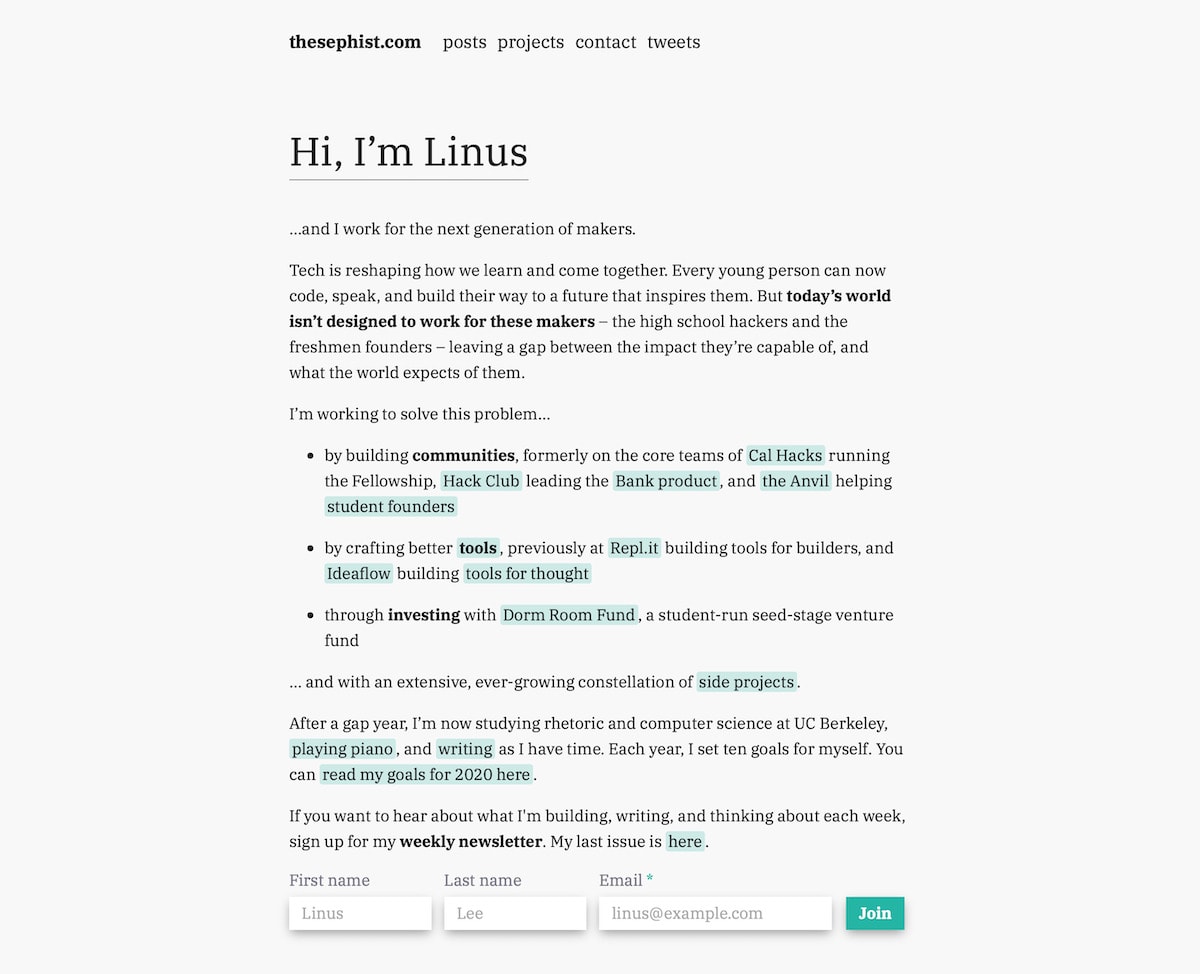 Looking through these designs, I was struck by the inevitability of moving on from even this current design. When I created this current design in late 2019, I focused most on longevity. I believed, as I still do, that it was important to build something that can withstand the tyranny of time. I wanted my writing to be valuable and worth reading five or ten years from now as they are today, and I wanted the website to be a medium that would age gracefully, and as little as possible. If the writing does its job, I thought, there’s no need for its shell to be ornamental or decorative. The writing alone should be enough. My belief in this hasn’t changed.

But even with today’s minimalist, bare-bones design of this site, I’m not so naive as to expect no more changes. I add and remove words from the site constantly, especially on the front page. I continue to add new projects and blog posts to the site, and every little bit added to the site makes it something different from what it was before. One day, the design itself will inexplicably also have to change. Even in the steady lull of quiet minimalism that I’ve tried my best to create for my words, every week, the website becomes something new with small, iterative changes. It’s always becoming what it will be, if only for a moment in time, to then become something else. The identity of the website feels fleeting.

Some people love re-reading books, or re-watching movies. Those who do tell me that they love this process of re-experiencing because even though the source material is the same (the book or film hasn’t changed), they are different. Reading the same novel, at a different place in life, with a more vast bundle of experiences and memories and scars and trophies, the same text can feel different. Watching the same film, as a changed person, is a different experience.

When does that change happen? When we live through a memory or read a book that profoundly changes us, when does that switch flip? Is it at the beginning, when we’re introduced to something new? Is it at the end, when the new memories settle into place in our minds?

To me, the most natural explanation seems to be that we are constantly, iteratively, changing. We are constantly becoming ourselves. With every memory or book or accident or victory the person that I am changes slightly, so that the next thing I experience, I experience as a different person. Like the needle on an irritable, confused compass, identity wobbles around, only appearing static and definite when we don’t pay attention.

I think this state of becoming is an interesting way to think about identity, about who we are. If we are all living through a process of constantly becoming something else, becoming ourselves, how can we even talk about our identities? When you ask me who I am, am I the person that I am this morning, or the person that I’ve become as a result of meeting you today?

It’s a strange-feeling idea, but I think we can find a sense of identity in this constant state of becoming something else. Every day I wake up a slightly different person, and when I speak of my identity, it’s not a snapshot of myself from one particularly special morning. My identity is the process of becoming myself. Who I am includes the question, what things about me are changing? I think identity is becoming, and when we try to understand identity as something fixed, we miss all the things that are changing.

Asking “who am I?” is like asking, who am I becoming?

I am becoming nearly twenty-two, a fifth of the way through my twenties. I’m becoming a software engineer and a better writer. I’m becoming more thoughtful, hopefully. I’m trading off naivete for a sense of purpose.

Thinking of our identities as fixed, static snapshots coerces us into focusing on one fixed slice of time, disregarding the fact that, by tomorrow, or next week, or next month, we’ll be different. We should instead ask who we are becoming. When we imagine others in our minds, we should also imagine who they are becoming, and how they might be different tomorrow. Any version of my identity or yours that ignores this constant state of motion is inaccurate. It’s just as wrong as saying the wind blows from the east, or the tide is high. It was right for a moment, but almost useless in its correctness.

If we imagine ourselves as immersed in this constant process of becoming, then every morning, we wake up to encounter ourselves anew. The you who woke up today won’t be the same you waking up tomorrow. And the small changes that accumulate in between these moments are where we find who we are.

Life is becoming; so are we, constantly, restlessly.