Outside the cockpit, the air chilled to fifty degrees Fahrenheit below zero.

The reinforced glass panes of the windows ripped through the thin upper atmosphere at such terrifying speed that it was hot to the touch from invisible friction against the winds. Two of the most advanced jet engines in the world roared some 50 feet behind the twin pilot seats, but neither of them could hear it: The SR-71 Blackbird flew at Mach 3.5, slicing through the air 85,000 feet above the ground like chainsaw through jello, racing the vibrations of sound its engines left in its own wake, and winning by miles.

The Blackbird earned its name because of the jet-black paint that covers the entire titanium exterior of the aircraft – a purely utilitarian choice to most effectively dissipate the immense heat generated by sprinting through the air three times faster than sound. It set speed records when it flew from Los Angeles to Washington D.C. in a few minutes over an hour. The same flight takes around five hours in a typical commercial jet airliner. To date, it’s the fastest jet ever flown. 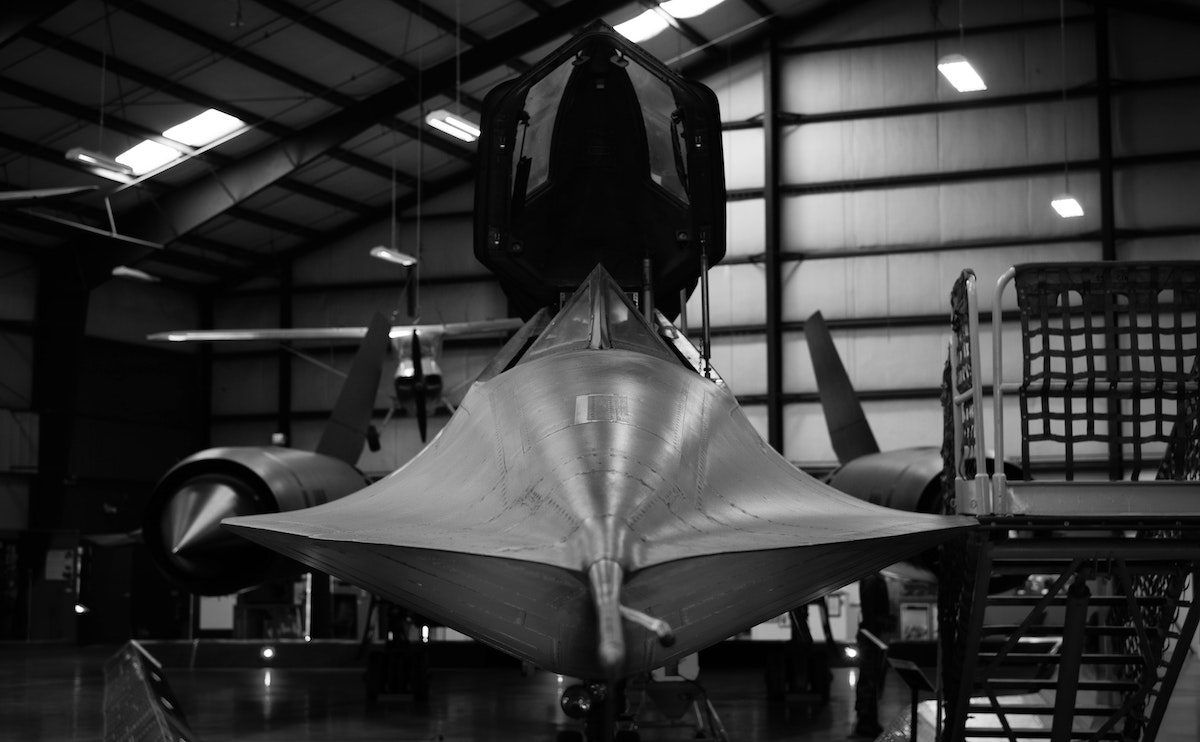 The SR-71 Blackbird was built in the late 1950’s by Lockheed’s Skunk Works division for the CIA’s Cold War missions. Skunk Works began as a small, elite group of around 40 aircraft engineers working under the industry veteran Kelly Johnson with little oversight from Lockheed and a carte blanche from upper management. The Blackbird is one of several storied aircrafts built by the Skunk Works team, in a lineup that also includes the famed F-117 and F-22, better known as Nighthawk and Raptor.

Over the course of its history, Skunk Works would move from building to building to design and deliver new innovative aircrafts for Lockheed. Many decades after the Blackbird’s maiden flight, one of Skunk Works' buildings would greet an unwitting pair of business executives: Steve Jobs and Ed Catmull, searching for architectural inspiration for a new building just outside San Francisco that would soon host a budding animation studio Steve had recently acquired, called Pixar.

When the lightning struck, Pixar – like its then majority owner Jobs – was on an apparent decline. Pixar had been building computer workstations and software designed for creating rich computer graphics, but the business was shrinking, and the company was being shopped around for sale, eventually resulting in Steve Jobs wholly owning Pixar. They were then only a computer company with a fascination for graphics and storytelling.

After rounds of layoffs and consolidation, by 1991, Pixar had just over 40 employees left. The company had already sold off its hardware division long ago, and the small team that remained awaited the company’s probable certain death by writing 3D animation software like RenderMan.

Later that year, Pixar struck a deal with Disney for three animated feature films for a meager $26 million. A few years later, the first feature-length film from Pixar, Toy Story, debuted to universal fanfare, grossing over $350 million worldwide. Pixar followed up with A Bug’s Life, Finding Nemo, Monsters, Inc., and The Incredibles – hit after hit after hit. Pixar’s landmark partnership with Disney saved the company, and propelled Pixar to the animation juggernaut status it enjoys today.

Pixar went public in 1995, just after the record-setting debut of Toy Story, eventually making its owner a newly-minted billionaire. Jobs, an exiled founder of his own company rejuvenated by the success and creative potential of technology at Pixar, returned to Apple a few years later for his final acts.

Project Purple began on a single floor in a building in Cupertino, locked and gated by key cards and codes even tighter than the usual levels of security at Apple. They were doing a phone. But nobody outside of those locked office perimeters would know that for a few years – even the cleaning crew were banned from the floor. To the rest of Apple’s unsuspecting staff, a few noted engineers simply disappeared over time, pulled into a mystery project.

The iPhone really came together in pieces, rather than from the whole. A web browser here, a phone radio there, a multi-touch keyboard here, an old abandoned tablet prototype there. One of the many miracles of the first iPhone is the way these disparate ideas melded together into a concept, then to a debut with an on-stage demo that sucked the air out of the room in 2007, to the best-selling product in the history of products.

But just as remarkable as the influence of the product itself is that the Purple Project was built by a team. Not a company or a division or a business unit, but a small, talented, squad of designers and engineers working tightly together in complete secrecy, competing and collaborating on what would be a history-defining marriage of engineering and design. An elite crew of the best people Apple could find, advised directly by the company’s executives, separate from the rest of the company’s operations. You might even call it a skunkworks project.

Just enough of only the best

I find these stories of era-defining teams so fascinating because it goes against the conventional wisdom that larger teams create larger impact. It emanates a refreshingly different message: small teams of very smart people, working tightly together in a trusted group, create the best inventions.

But the Blackbird, Pixar, and the iPhone were not products of large, sprawling corporate bureaucracies. In fact, they were designed to be the polar opposite: a small, elite group of the most talented people available, working closely with experienced visionaries with a high degree of autonomy and a singular focus.

I think these stories invite a closer look at the way we think about building teams. It asks us to value talent over scale, trust over control, and focus over delegation. It suggests that the way to build great teams is to find only the best people – the top individuals you’ve worked with – and to gather only just enough of them to realize your ambition. However you measure “best” – your balance of talent, creativity, persistence, kindness – make sure the team is always empowered to do the right thing. For the project, for the work, for each other.

One of the profound lessons I’ve learned in the last year is that it is the people that always make the difference between ideas that succeed and ideas that fail. The right team, given the wrong ideas, will correct their course and build the right thing. The wrong team, given the right ideas, will stumble over the many obstacles that litter the road to creating something great. It seems that in order to be a great maker of things, whether software or companies or something entirely different, people matter more than anything else. On this challenge, I think there is still much to learn from stories of superlative teams past, from the Blackbird, Pixar, and the iPhone.

More than usual, this piece pulls from external reading. If you’re curious about any of these stories of invention, I would highly recommend diving deeper – there are always more insights to be gleaned.

On the SR-71 Blackbird aircraft and its history, check out Wired’s piece on the aircraft and CNN’s historical overview, as well as the history of Lockheed Skunk Works itself.

On the history of Pixar and Steve Jobs’s tumultuous leadership of the studio, I heavily referenced Brent Schlender and Rick Tetzeli’s excellent Becoming Steve Jobs as well as other sources on Pixar’s corporate history.

On the history of the iPhone project, I pulled from Ken Kocienda’s Creative Selection, the aforementioned Becoming Steve Jobs, and an excerpt published on The Verge about other accounts of the original Purple Project team.