Language is the most concrete way we communicate. We can write down symbols for the words we speak, and refer to them and study them easily. As a result, it’s easy to fall into the trap of thinking that much of our communication is in the language we speak.

Of course, this isn’t the case. Common knowledge tells us that most of communication is actually non-verbal. There are behavioral aspects to non-verbal communication, like how we orient and move our bodies and how we gesture. There is also the way in which we speak – things like pitch, pace, prosody, and volume – that influence the meaning of the words spoken. The field of paralinguistics studies these peripheral considerations of how we communicate with language. 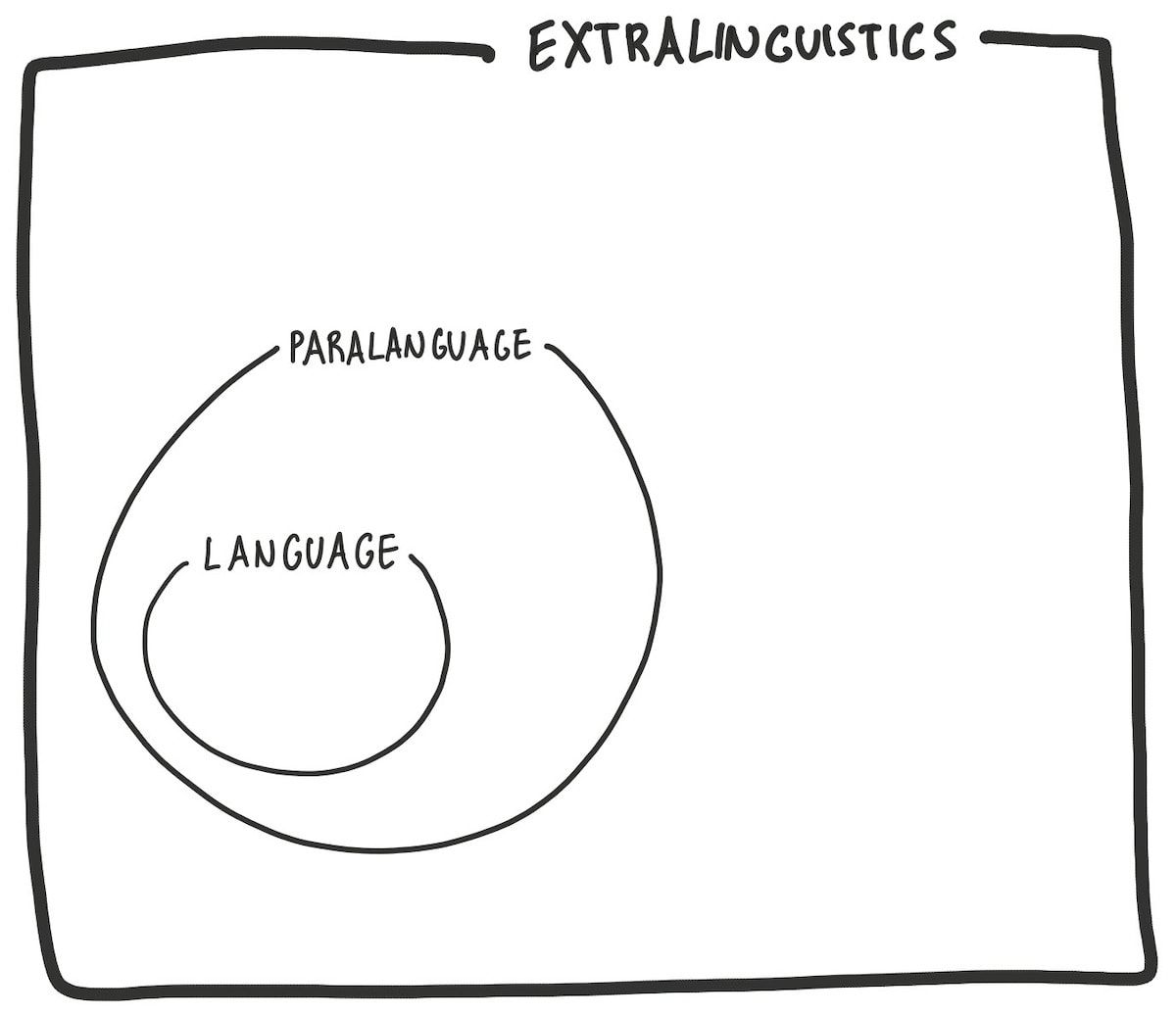 But even language and paralanguage only scratch the surface of how we communicate. Communication is a side effect of perception, and anytime we perceive something in the environment from another person, there’s some degree of communication happening. A better word for these extra-linguistic ways of communication might be “signals” or “hints”. We find signals about other people in the way we dress and carry ourselves in space. When we show up early or late to a conversation, there’s meaning embedded in it. We may hold something while speaking, or gather our hands together out in front. These small hints add up to produce nuanced layers of meaning that are not only absent in language, but impossible to express with just words. We might call these circumstantial, behavioral signals of communication that support linguistic communication extralinguistic cues.

Like verbal language and paralanguage, extralinguistic behaviors are interpreted in context. Whether you’re early or late to a meeting changes its meaning depending on the occasion or the cultural background that we each share, for example. If I interrupt your sentence mid-thought to add an anecdote, you could interpret that in any number of ways, from rudeness to enthusiasm, depending on numerous other factors surrounding the conversation. While extralinguistic behaviors provide context for what’s being spoken, they are also themselves influenced by other, deeper context of the situation.

One less-talked-about instance of (extra-)language is the set of common metaphors and imagery that we use in our speech. Each community or linguistic tribe has some common set that its members reach for, that might sound strange or out of place to outsiders. If you’re in the Silicon Valley tribe, as I am, you might tell someone to “optimize for” a goal in their life or talk about how some intangible benefit like relationships “compound faster” over time. People in this industry talk about “outliers,” in reference to Malcolm Gladwell’s book of the same name, or doing things “at scale.” These expressions sound completely out of place to outsiders, but to a certain crowd of people, these phrases are a core part of a shared lexicon that provides vocabulary with more nuance than simple, generic words. Though I’m less familiar with other linguistic communities, I imagine there are equivalent shared vocabularies of metaphors and references in nearly every subculture.

I think it’s not a stretch to think of these sub-cultures of shared vocabulary and extra-linguistic behaviors as different languages. If you speak as a Silicon Valley investor does, in a sense, you’re speaking a different language than a Midwesterner who’s spent their entire life working in the government. Languages don’t just vary across borders, they also vary across subcultures in more subtle but nonetheless important ways.

When we understand language more deeply in these two ways – first, by accounting for behavioral signals and second, accounting for a shared universe of metaphors and expressions – “translating” language becomes a much more daunting task. We’re getting better at translating a sequence of words to a sequence of different words in another language that carry similar meaning, but in translating just the words (which it itself a lossy and imperfect process), we flatten the multi-dimensional space of communication to just one task: stringing words together and speaking them in succession.

The problem with this understanding of translation will be obvious to anyone who has watched a foreign film, translated. You may have been able to understand what was being said, but it’s a far cry from watching a story of characters not only speaking in your native tongue, but also acting in the way that you’re familiar with, in the context of cultural mannerisms and popular references you know by heart. Communication is more than language or even paralanguage, and a purely linguistic picture of translation throws the influence of culture and linguistic tribes by the wayside.

Not necessarily. Obviously, being able to understand some meaning is better than no meaning at all. But I think it’s much more constructive to think of translation as an aid, rather than a solution. Communicating across cultures and even subcultures is a complex task that requires us to understand the meaning of behaviors and cultural references and the vocabulary of a specific tribe, in addition to the words being spoken. Language is mostly how people use it, not how it’s constructed. When we view communication and language as the complex, multidimensional processes of negotiation that they are, rather than a simple problem of combinatorics of words, I think we prepare ourselves much better for understanding each other more fully and collaborating more deeply.