How to grow a budding startup community 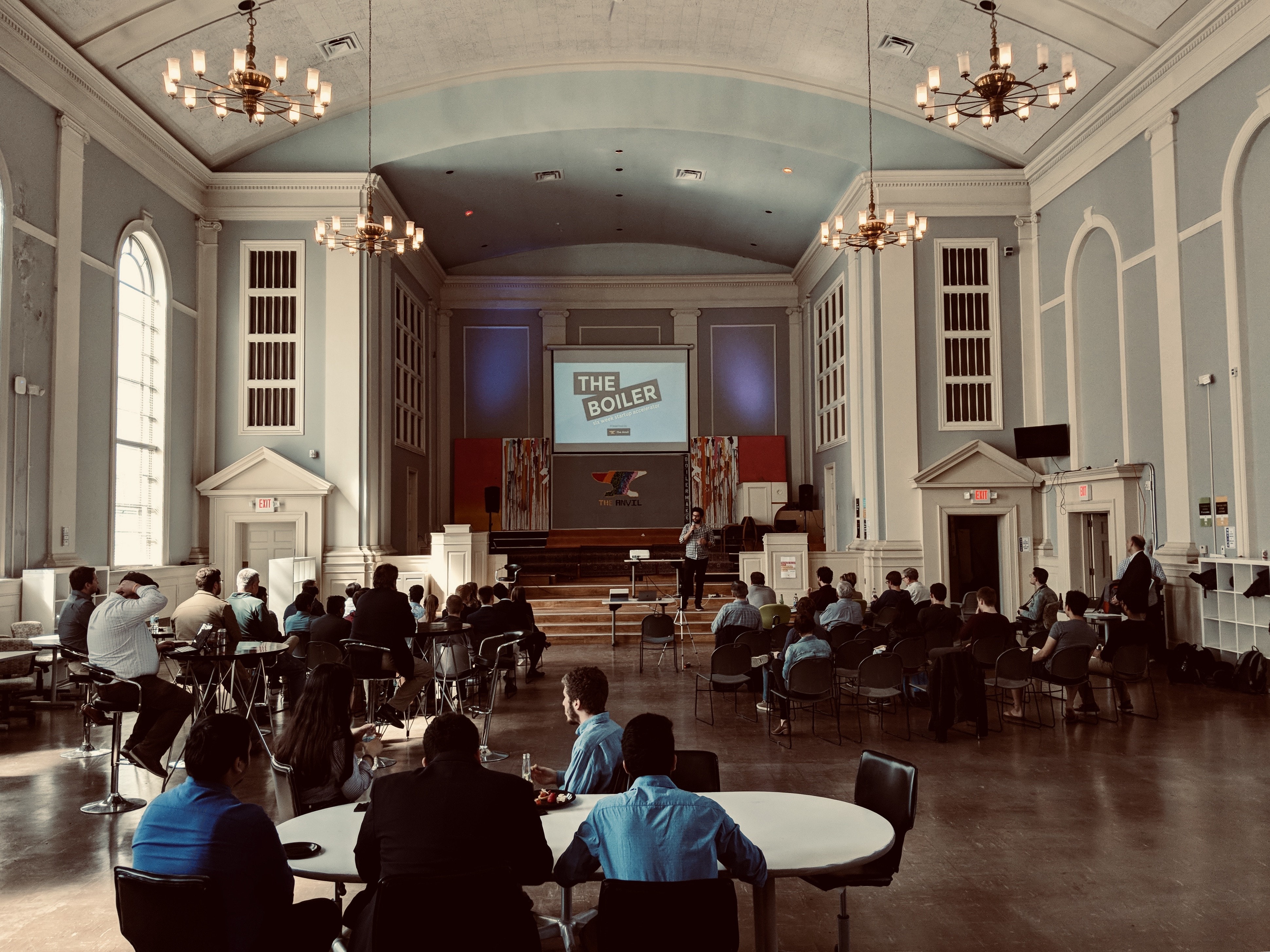 Silicon Valley is not inherently special.

By that, I mean that there’s nothing special about the place of Silicon Valley, or the people of the Valley. If you take the best engineers from Chicago or the best founders from Cincinnati and put them against the best from the Valley, you’d be hard-pressed to find a great differentiator. This is something entrepreneurs who visit the Valley from the Midwest talk about often, and something I firmly believe in:

Instead, the not-so-secret secret sauce of the Valley, like all great entrepreneurial hubs, lies in how the people are connected. This densely connected and frequently changing network is Silicon Valley’s key differentiator.

So I propose a general principle about entrepreneurial hubs: The productive success of a startup ecosystem is directly tied to the frequency of organic collisions between founders, engineers, new entrepreneurs, and investors in a community. In the Valley, the density of these people that drive entrepreneurship is so high that it creates a self-sustaining chain of collisions between founders, engineers, and investors. This helps drive new ideas forward and connect the new founders to the veterans.

Business is not a solo project, and startups least of all. The more times the founder of an early startup runs into other founders, mentors, investors, and entrepreneurial engineers on a daily basis, the higher the likelihood of the startup’s future success, from more funding, better products, and more informed decisions. The network makes the startup, and density is key factor that determine the utility of these networks.

By density, I mean the density of entrepreneurial people in a community. It doesn’t have to be just founders. Previous founders, business mentors, academic researchers, students, engineering talent, and an ample market of early adopters all comprise the “entrepreneurial community” in a startup ecosystem. The more of these kinds of people there are per capita, the higher the chance that founders will run into these people, and the higher the chance of startup growth and success, by whatever measure you choose.

But a critical factor in the most productive entrepreneurial networks is diversity. A network of just founders, or a network of just successful financial executives with cash to spend, won’t get anywhere. And a network that doesn’t equitably reflect the larger community, in gender, politics, culture, and background, will meet more roadblocks than breakthroughs.

This positive correlation between density, diversity, collisions, and startup growth is why the world’s most innovative startup hubs are centered around great universities — Silicon Valley around Stanford and UC Berkeley, and Boston around Harvard and MIT. Universities harbor some of the most diverse, entrepreneurial, academically inquisitive people in the world, and the environment pushes people to meet new people and get connected. This makes university ecosystems ripe for new startups.

But even in startup hubs without world-class universities, this correlation between frequent collisions and success still shows. Take New York City, for example: The quick pace of life and density of well-connected people in the metropolitan area means it’s easy to meet new people often. Or take Shenzhen, China, which boasts some of the quickest product development cycles in the world: The density of people, combined with work weeks filled to the brim and a pressure to compete, drives frequent collisions, faster iteration, and more startups.

Density drives collisions, and collisions drive connections that create the tapestry of entrepreneurial talent and demand essential to a startup hub. So how can we replicate this kind of an environment in other cities?

This is a question I’ve been thinking about for a long time. How can we take growing cities like Columbus, Indianapolis, and Chicago and create the same kind of entrepreneurial networks that exist in Boston or the Valley, in the Midwest?

If we subscribe to the idea that high density, frequent collisions, and a diversity of talent are critical for startup success, the answer is straightforward. Drive more collisions within the entrepreneurial community, between investors, mentors, founders, and early adopters. Once this flywheel reaches a critical point, the network becomes self-sustaining. Founders connect other founders, investors reach out to new investors, and early adopters convince the rest of the community. Mature startup hubs are cities that have long passed this critical point. And if we can reach the same critical point in smaller, Midwestern cities, perhaps we can create more self-sustaining networks!

Creating a self-sustaining reaction at Purdue

I think Purdue University is behind one of the most promising engines of entrepreneurship in the American Midwest. But it’s still a young community, and the density of entrepreneurs at Purdue is still low enough that, without outside energy, the little amount of entrepreneurial “heat” in the community dissipates quickly.

But there are brilliant founders and engineers at Purdue, just like in many other budding startup hubs in the Midwest. What we need here, more than an influx of capital or a wave of engineering talent, is higher density and more collisions. We need to create an environment where more to-be-founders bump into talented engineers, optimistic investors, and veteran entrepreneurs on a daily basis. One of the best ways to do this is to organize events around entrepreneurship, like Matchbox’s T-6.6, The Anvil’s Pitch Nights, and Foundry Grounds. I’ve seen firsthand how these events make connections that push startups forward in meaningful ways.

But how do we accelerate this even further? I think one way to do this is to draw a map — an “atlas” of entrepreneurs — within Purdue’s startup community. Let’s map out where the community’s successful founders are, and find the founderes and investors who inspired them and helped them grow. Let’s map out the engineers that dive into entreprenuerial projects, and connect them to new founders that are looking for talent. Even if we haven’t reached the critical level of density of entrepreneurs, maybe by consciously. mapping out the entrepreneurial community, we can drive more of the kinds of collisions and connections that can help startups grow.

De-fragmenting a crowded scene at Berkeley

Coming from Purdue’s startup ecosystem, the energy at UC Berkeley and the Bay Area is a notch higher. There’s already a high density of would-be-founders, and dozens of organizations and events put them in the same rooms with veteran founders and engineering students on a daily basis. There’s lots of collisions between the players in the ecosystem. It’s a hot community that churns out lots of startups every year.

But this density of interest creates an entirely different problem: fragmentation.

Unlike Purdue, where there are a handful of organizations that try to work together to bridge gaps in the university’s startup ecosystem, Berkeley’s ecosystem is crowded by dozens of competing organizations, clubs, and accelerators that often end up duplicating each other’s efforts and invest in redundant initiatives.

I think an atlas of entrepreneurs would help in this case, as well. Rather than making a new founder hunt for the right resources between organizations, it makes more sense to connect them with people, and build a network of individuals that guides new founders through whatever obstacles or questions they face. Rather than asking “What accelerator should I apply to?” or “What club should I ask to get engineers for my startup?” founders should be asking “Who’s knowledgeable about startup accelerators, and can give me a good introduction to them?” and “Who can get my idea in front of lots of engineers that may be interested in working with me?” I think the latter is a more natural way of growing an idea, and one. that rightly emphasizes people rather than organizations. That’s not to say that entrepreneurial organizations don’t have a place in the community — they do essential work. But I think we can do more to build that web of organizations and people easier to navigate, by starting with people rather than directories.

In pursuit of mapping out Purdue’s and Berkeley’s entrepreneurial communities, I’m starting a survey of founders and entrepreneurial students! These are quick, five-question forms that try to discover the people that help entrepreneurs in their journey.

As your responses come in from these surveys, I’m going to try to compile it into a database accessible to the university communities and share it with organizations on campus that work with founders. My hope is that we’ll be able to map out a network of entrepreneurs that span clubs and communities, and that’s useful for founders to find the help they need to move forward. If you know a founder or are one yourself, please fill out the survey, and send it to anyone that may be helpful in this project!