Ok, so this one obviously requires some context:

I help run a venture accelerator for student teams at Cal Hacks called the Cal Hacks Fellowship. This weekend is our onboarding for the cohort, and I’m supposed to prepare a five-minute “lightning talk” on whatever topic I please. Naturally, I chose my topic to be our lyrical pop queen Taylor Swift. But since the event is startup-themed, I chose to turn this into a five-minute pitch of Taylor Swift as a venture-backed business, in the standard early-stage startup pitch deck format.

I ended up spending three hours prepping this 5-minute talk, which was 2 hours and 59 minutes too many. But I couldn’t let it go to waste, so here I’ve transcribed my talk alongside my slides. Enjoy—

Thanks for coming to hear Taylor Swift’s story. I believe she’s the defining singer-songwriter of our generation, and I want to make a case for the opportunity her music has for the next decade of music in the global market today. 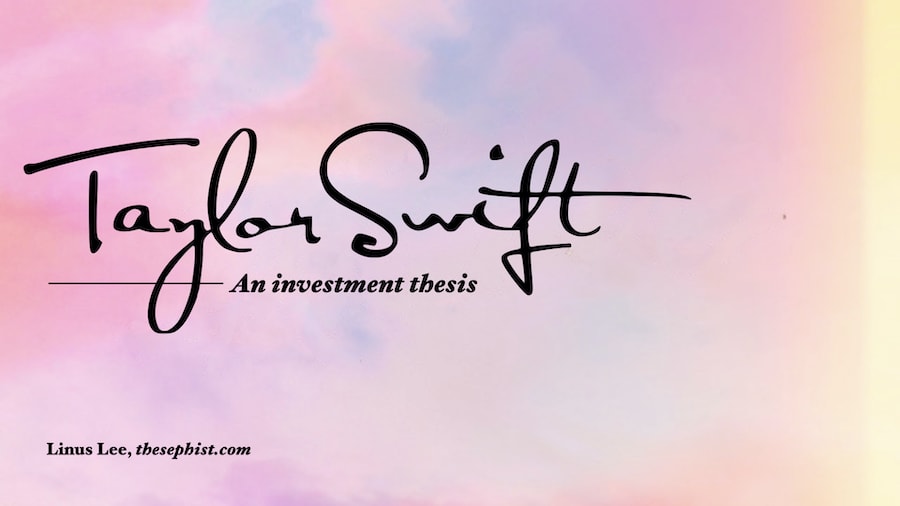 Before we dive into the pitch, I want to begin with our big idea:

Taylor Swift’s songwriting is rich with deep and complex narrative that young consumers today crave, and this presents an era-defining opportunity for her music to capture the hearts of a generation. 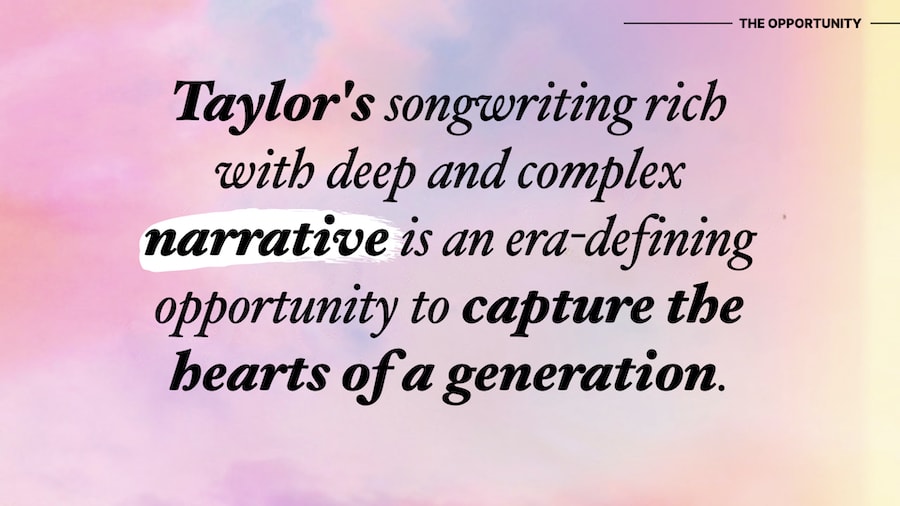 Popular music today commonly suffers from three big pitfalls. Namely, the generic songwriting designed to appeal to big audiences results in mass-market music that’s both lyrically and topically repetitive, and gets old quickly after a few listens. Often, music meant to be aspirational and autobiographical coming from multi-millionaire pop icons also fail to be relatable to the stories of the average pop music consumer. 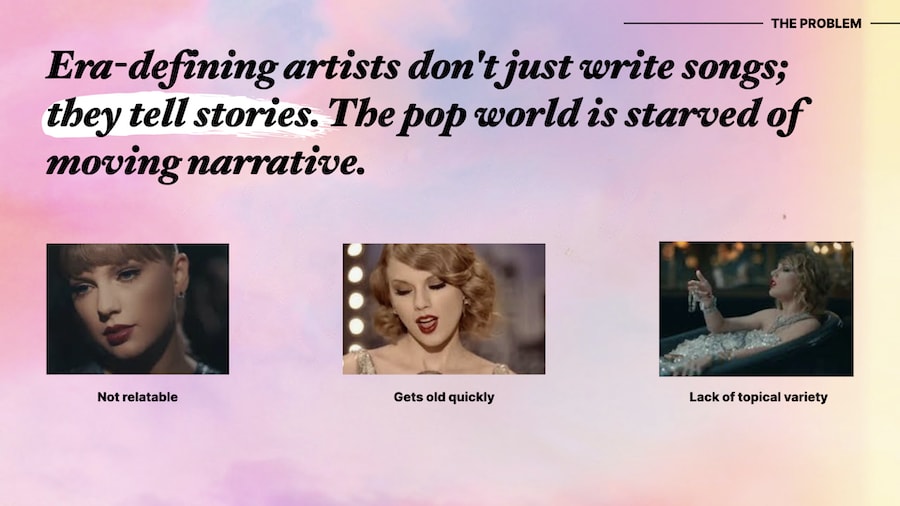 Every other song on the Billboard charts are about how tonight is the night and we only have tonight. These aren’t stories today’s consumers can aspire to or emphasize deeply about. Today’s pop market is saturated with artistic and narrative mediocrity, and ready for songwriting with more depth and feeling.

Taylor Swift’s music has time and time again become the industry’s bar for personal, deeply thoughtful, artistically masterful songwriting that weaves compelling narratives across songs and sometimes across albums. Her talent has been recognized by both critical reviewers and the mass-market audience, as we’ll see later from her traction. This has earned her the opportunity to collaborate with some of the Western music industry’s leading producers and artists. 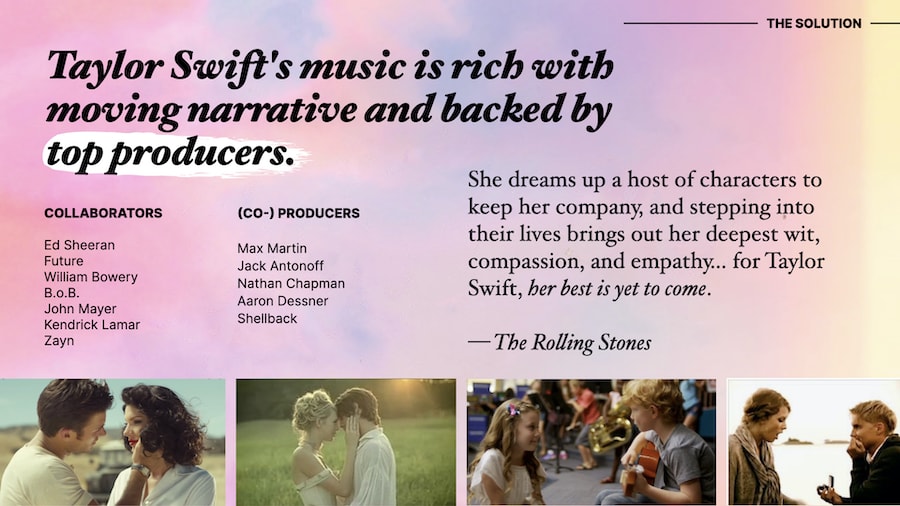 To understand the appeal of her work, we need not look farther than her lyrics, which read less like modern American pop music and more like Wordsworthian poetry. Compared to the competitors in the space, her songwriting charms her audience with sophisticated symbolism and wordplay, stories that weave between songs, and complex characters with realistic motivations that appeal to the tastes of modern music consumers. 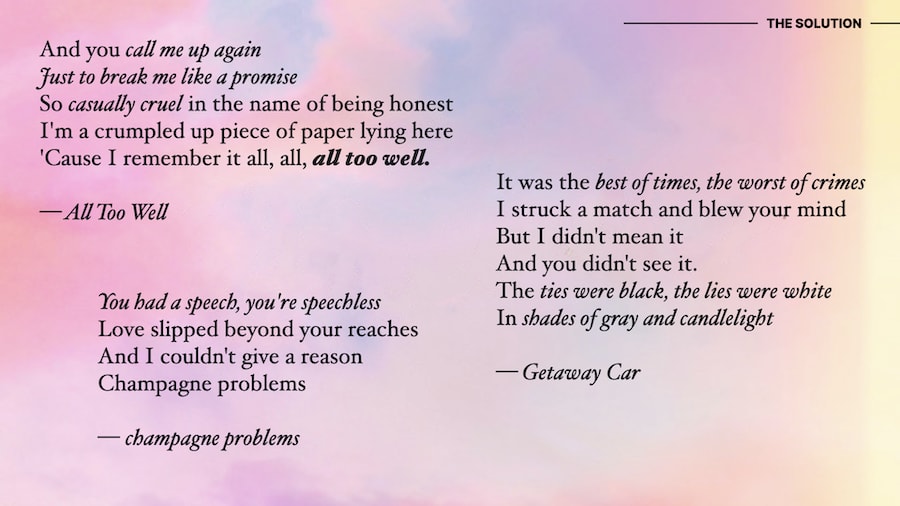 Swift has become known for her autobiographical and narrative style of songwriting, winning the Songwriter of the Year award multiple times, as well as earning the adoration of millions of fans for her deep-cutting wordplay in songs like All Too Well and champagne problems. She moves skillfully between contemporary topics like Internet culture and timeless, Victorian-feeling references, and all this culminates in music that resonates across generations and cultural divides. 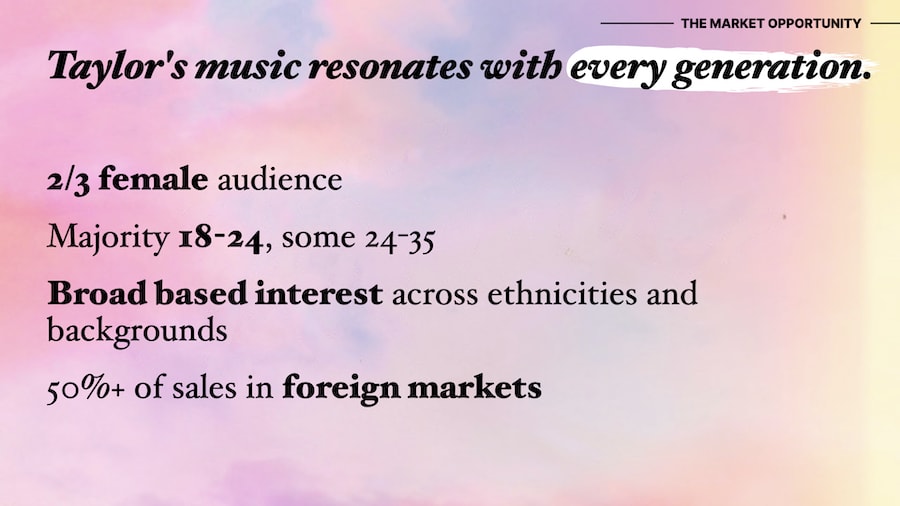 Her most effective go-to-market strategy has been one she helped pioneer in the early 2000’s, by growing and retaining a loyal audience of fans through personal content and engagement on social media.

Her online following has helped her directly grow an audience on websites like Tumblr, and spiraled off strong communities like the /r/TaylorSwift subreddit which collectively creates some of the finest fan art, critical commentary, and community dynamic anywhere in the pop industry. Fans can be seen constructing costumes, recreating Easter eggs from music videos, and building all kinds of crazy and incredible artwork across the Internet and at concerts. 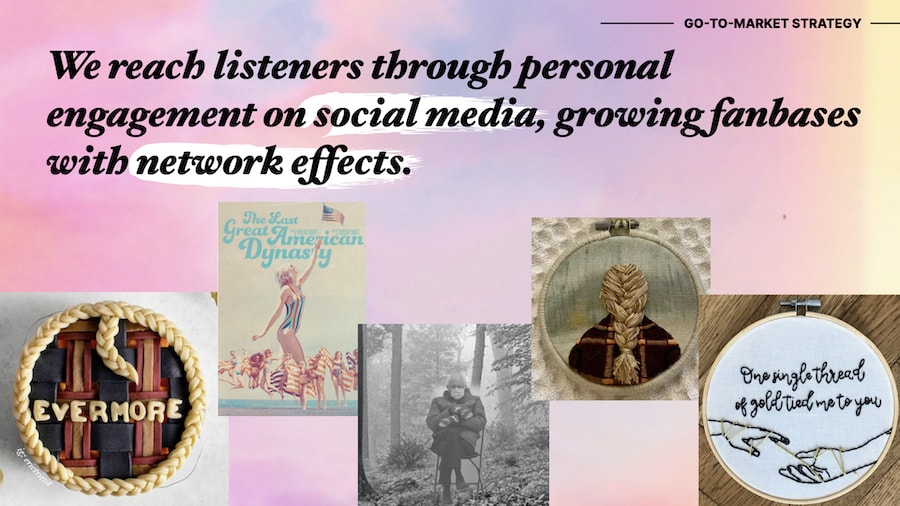 Over a more than decade-long career Taylor Swift’s music has consistently demonstrated traction with a global audience, as we can see from this highly scientific, quantitatively accurate chart of her sales growth over time:

Perhaps even more important than sales traction, Taylor Swift has demonstrated the ability to move deftly between genres and reinvent her style multiple times, moving first from country to pop, then from pop to alternative indie styles. At each turn, she has brought along her existing audience to new genres and earned the love of new listeners. 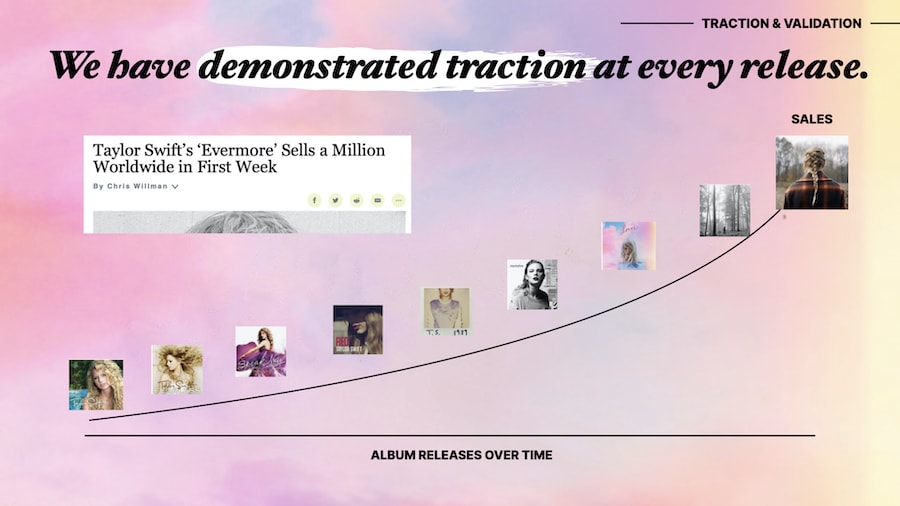 This strategy of artful reinvention and growth has translated her initially small loyal community of fans into one of the strongest, most thoughtful, diverse fan communities online, according to myself, who is a recognized expert on this topic.

Building on Taylor Swift’s growing interest and traction, she has built a reliable monetization flywheel across a wide product lineup. The lineup consists of low-margin, high-volume products like album sales and streaming revenue on one end, and high margin, low or limited-volume items on the other end with ticket sales and limited-edition merchandise. Because of the scale effects inherent in her fan community, this range of products results in a flywheel that inspires her fans to buy further into the community at every level. 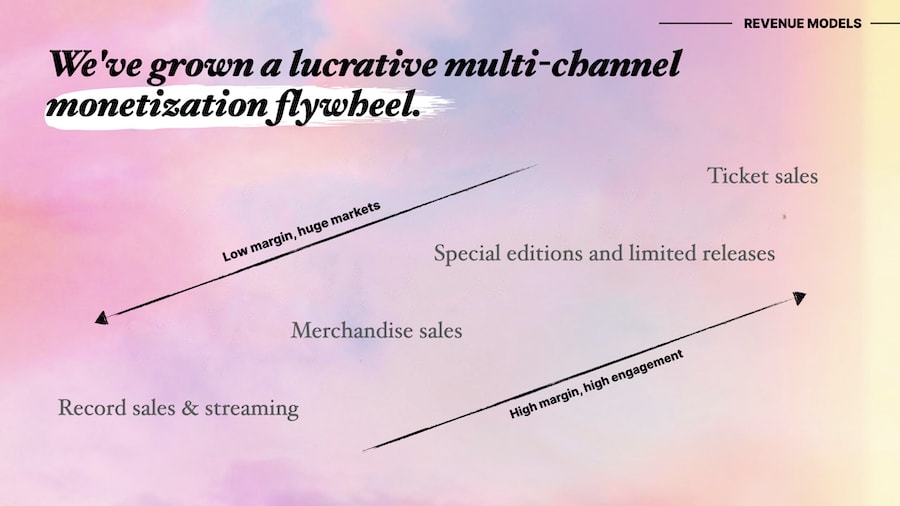 Let’s talk about her competitive landscape against the backdrop of modern pop.

Pop is a highly competitive space without any winner-take-all dynamics. It takes consistent creation and reinvention to stay top of mind for listeners, and Taylor Swift has successfully carved out an enduring place in the zeitgeist. We can see this from this competitive market map, co-produced for us by McKinsey, Bain, PWC, and Deloitte through a rigorous market research process and art-directed by the celebrated Pentagram design consultancy: 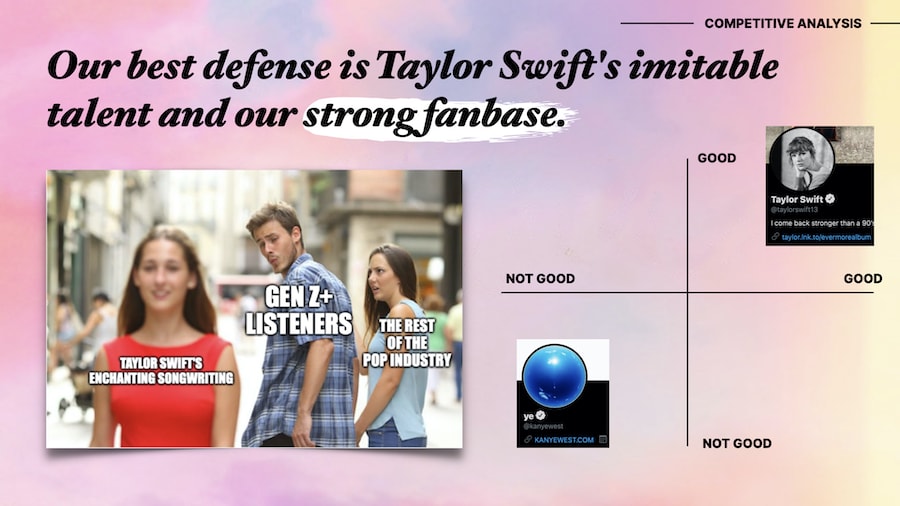 Clearly, Swift is good and Ye is bad.

But perhaps nobody describes her true competitive edge in this market than Taylor Swift herself, in her new track long story short: 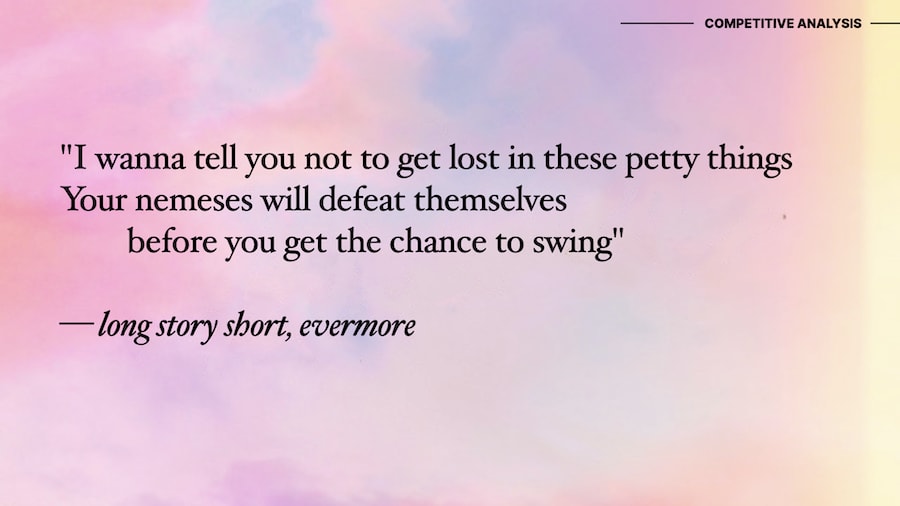 So, where is she going from here?

The nature of her creative work doesn’t lend itself to accurate long term projections. However, I believe we can anticipate her tenth studio album and a re-recording of her back catalog of albums sometime in the next 12-18 months, and a return to her touring schedule post-COVID.

Her team is well-financed to lead her growth and work through this future, and our ask to you today is to simply keep listening, and to join the community. It’s honestly great. 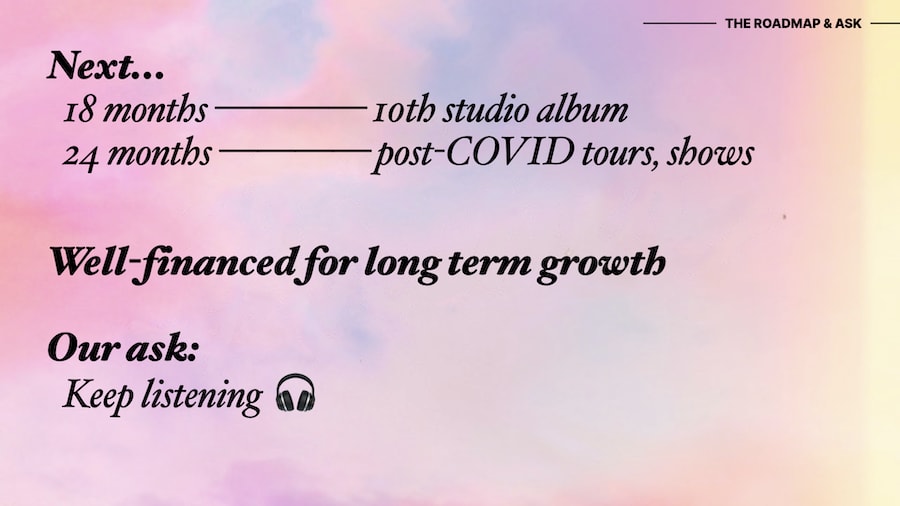 Thanks for joining us today to hear this story, and we’ll now open up to questions.

← My role models, or, a few stories of others to live by

Good ideas on tool-making from the story of UNIX →