Note-taking in the wild: living with the Surface Duo

I don’t normally write about new gadgets when they come out, but once in a while, a new device captures my imagination and creativity so much that I can’t help write a little bit about how I use it, and why it gets me so excited. The last time this happened, it was about the 2018 iPad Pro which I still use daily. This time, it’s about the Surface Duo, a dual-screen folding phone-tablet hybrid from Microsoft running a funky crossover of Google’s Android with Microsoft’s services. 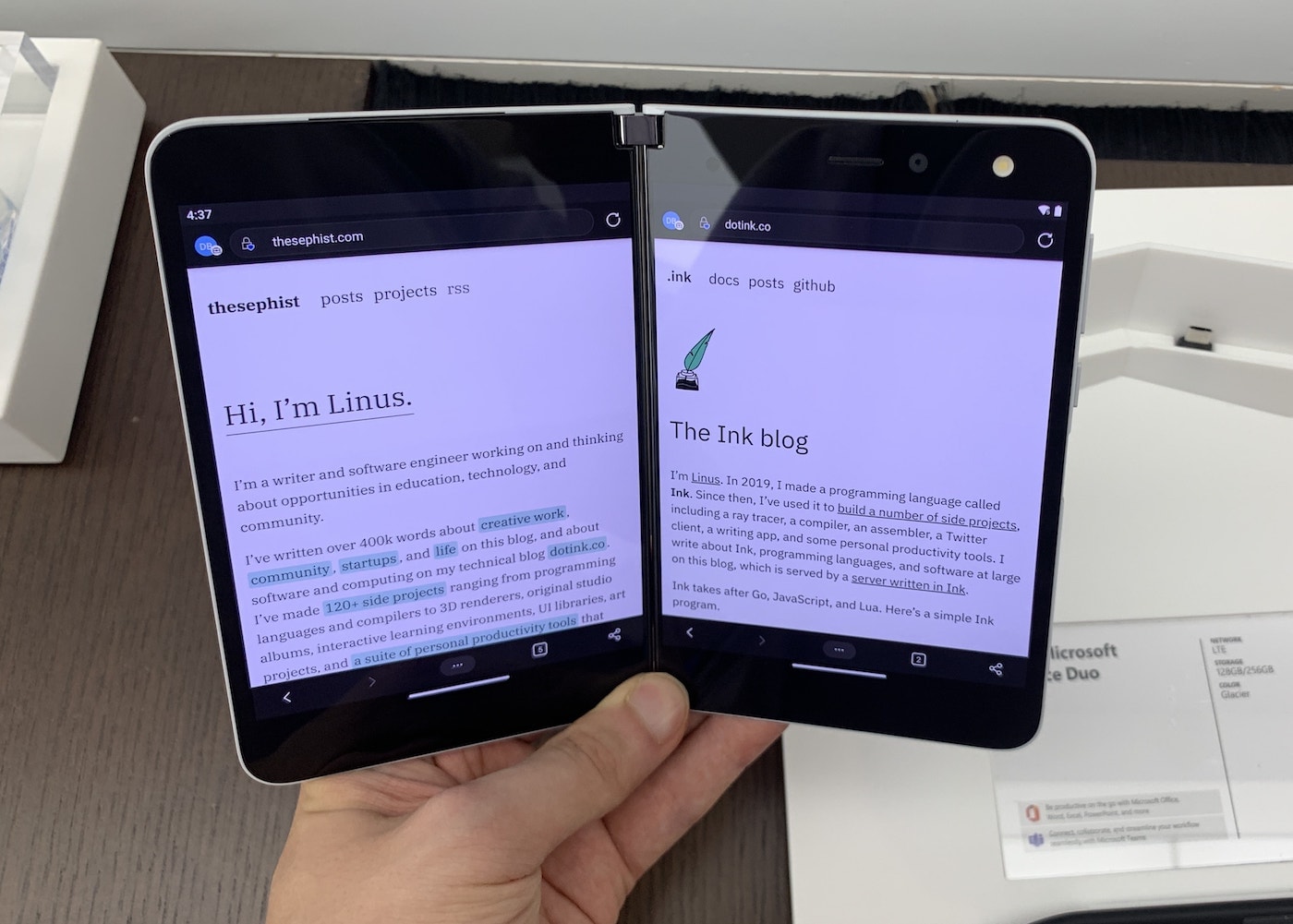 Most of my thoughts about the Duo will be from the perspective of someone who reads a lot and takes a lot of notes on their mobile device. I’ve got a bunch of big screens at home for me to watch videos, listen to music, and do everything else computers are good for. But when I’m out and about in the city and need to burn some time or write down a fresh idea, usually all I’ve got with me are my phones, and in those use cases, the Surface Duo delivers.

Yes, I said. “phones”, because I carry two phones: an iPhone and an… other phone, which is usually a more quirky Android phone. This actually turns out to be important, because the Duo isn’t quite polished enough to become your only device in your pockets, but as a secondary phone that can sometimes become a better pocket computer, it’s great.

Reading and writing with the Duo

I’ve carried the Surface Duo in my pocket for about a week now. It’s much too early for me to have any definitive opinions about the device as a daily carry, but it’s enough for me to have discovered some fun and genuinely useful things I can do with the Duo that I couldn’t before.

The first change I noticed in my day-to-day life is that I read a lot more when I am outside with the Duo. This is almost entirely because of the fact that I can unfold the phone’s two halves into a large, combined screen that feels like the size of a small paperback book. While reading on a phone feels so constrained that I only ever want to do it if I have no other options, I’ve found myself reading on the Duo’s unfurled screen even at home on the couch, as well as when I’m sitting outside or just waiting in line. 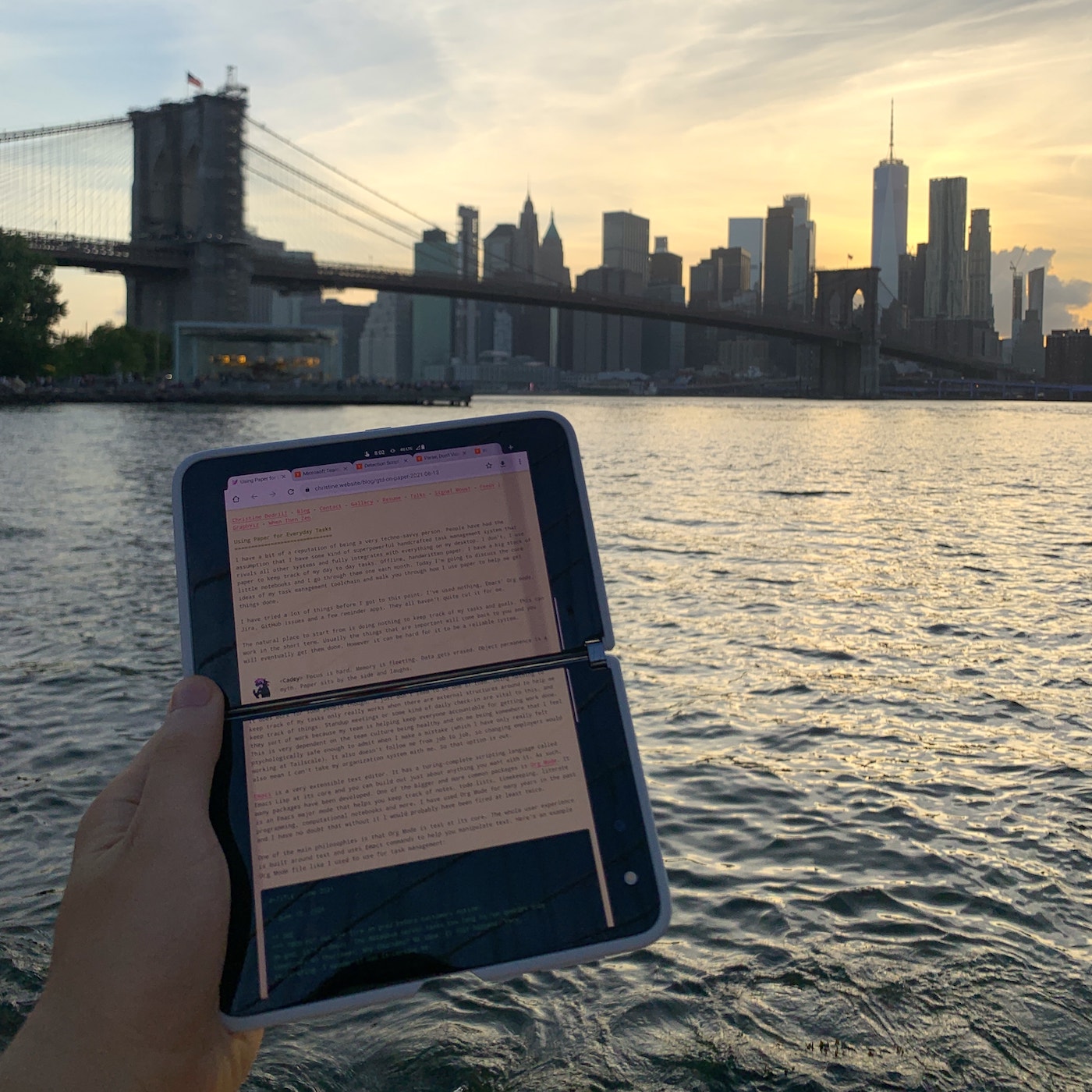 The Surface Duo makes reading long-form online content enjoyable, rather than uncomfortable like on small phone screens. When I wand to read something less ephemeral, I can turn the tablet horizontal and open up a Kindle book to stretch across the phone’s two screens perfectly.

In addition to reading more, I’ve been trying to get better at remembering small things that escape my mind in the day-to-day by writing things down. Before the Duo, I would just open up a notes app and dump my mind there, so I could come back to it later when I was sitting in front of a proper computer. I can’t say the Duo changes this workflow dramatically, but with the Surface Pen stylus and OneNote, I’ve found it much more fun to jot down notes in the moment, when I’m outside. As a result, I’ve been taking more notes after conversations with people and remembering more of my random ideas on subway rides. This seems to be a case where technology is better by motivating me, rather than by enabling something totally new.

So far, I’ve talked about using the Surface Duo’s two screens together as a single giant screen to read and write. But if you visit Microsoft’s marketing page for this device, you’ll see there is another huge use case for these two screens – two-app multitasking. I can have one app (say, a web browser) on the left screen and another app on the right (say, OneNote for scribbling down notes) and use them together. Though I do this less often than simply reading or writing, multi-tasking reading and note-taking like this was definitely the most “a-ha” moment for me with the Surface Duo, and I try to do it whenever I get a chance to sit down outside. It seems like a use case that just makes sense. Anytime I need to read and take notes on what I’m reading, whether it’s a long email, a book, or a blog post, this two-screen setup is infinitely better than juggling two apps on a tiny iPhone screen.

Here’s my exact setup (in a funky, dual-screen screenshot). One neat trick I’ve learned to love is that you can select some text from a webpage or an app, and drag-and-drop it over into my OneNote page to record it and annotate it for later reference. I found myself using this feature all the time, partly because it’s so useful, and partly because it’s just plain fun to drag stuff across screens. 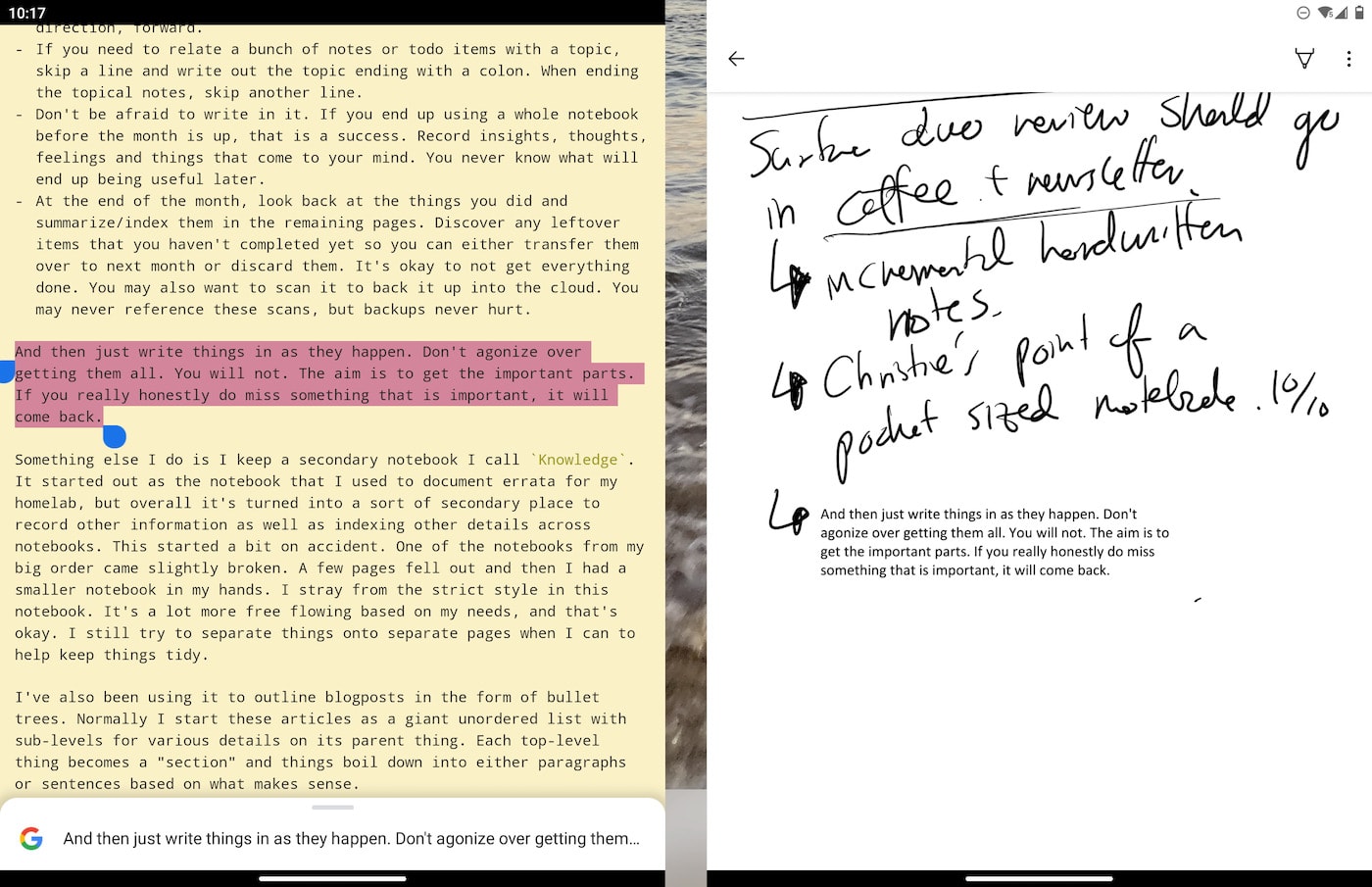 OneNote isn’t my main note-taking app, as you might know if you’ve read any of my other posts. But OneNote just so happens to be the app that integrates best with the Surface Duo because of the work Microsoft has done to make the hardware and software work well together, so whenever I’m on the Duo, I use OneNote as the “top of my funnel” for notes, and I copy them over into my “main” notes apps when I’m at my computer.

The astute among you may now be asking, “That’s great, Linus, but can’t you replicate this exact workflow by using two apps side-by-side on an iPad?”

Why, yes! You can. You can have a notes app on one side and a browser on the other side of a big iPad screen, and take notes this way. But I don’t carry my iPad around when I’m going for a walk or out for coffee. I carry my phone. If I have an iPad handy, I usually also have my computer nearby. The screen of the Duo is big enough that it’s replaced many of my iPad use cases. With the Surface Duo, I’m starting to read and note-take much more when I’m outside (which is often these days) in an Uber or during commute to and from places.

I’ve referenced Christine Dodrill’s blog post on their note-taking workflow before, using small notebooks and a pencil. They write:

Get a cheap notebook or set of notebooks. They should ideally be small, pocketable notebooks. Something like 30 sheets of paper per notebook. […] Start a new page every day. Put the date at the top of the page. […] And then just write things in as they happen. Don’t agonize over getting them all. You will not. The aim is to get the important parts. If you really honestly do miss something that is important, it will come back.

Though my Surface Duo doesn’t have all the benefits of paper, I think this pocket-sized notebook form factor is the perfect one for jotting down quick notes in this style. (And being digital has its own benefits, like automatic backup and sync.)

In general, the Surface Duo doesn’t really feel like a phone. I never initiate calls on it, because it kind of looks ridiculous to hold a baby-size tablet up to your face. But I’ve taken a couple of calls on it, and when it rings and vibrates, I feel pretty silly trying to fish this thing out of my pocket and unfold its hinge all the way around so I can hold up the right one of its two screens to my face. Yeah… it’s not a great phone.

I would instead describe the Duo as a true pocket computer, a big screen that fits into your pocket. Especially when unfolded, the Duo feels a lot more substantial than most smartphones, because it fills up your hands and demands that you do something useful with it, instead of just scrolling through Twitter or checking the time. On the other hand, to do anything at all with the Duo, you need to first unfold the thing. There is no secondary outside screen on the front of a closed Surface Duo, like with some other foldable phones. This means I’m much less prone to just idly wake the phone to check the time or scroll through notifications, if I don’t have a legitimate reason to use the phone. All of this together makes the Surface Duo feel less like a distracting phone and more like a small, underpowered computer I can bring with me in my pocket.

The future is still pretty rough

At the start of this post, I noted that there are a few reasons why having the Duo as a second phone made sense, but using it as my only phone wouldn’t work. One of them is what I described above – it’s not the best telephone. But the more pressing reason is that despite Microsoft’s best efforts and series of software updates, the software experience on the Duo is still rough and buggy, even compared to other new Android devices. There’s no way around it – you’ll have to suffer the consequences of being an early adopter.

The Surface Duo makes you use swipe gestures around the screen to move and position apps around its two screens, but about 20% of the time, those gestures don’t quite register for me, and it takes a couple of tries. The automatically adjusted screen brightness occasionally gets blindingly bright in dim lighting. Unlocking the device and opening apps sometimes takes too long, to the point where I occasionally doubt myself and tap on the screen again only to have the device do something unexpected in response.

Hardware-wise, the Duo also falls short in many places. The camera is just plain bad – I haven’t taken a single picture on it, in lieu of the iPhone XS I usually also carry. I could see the foldable form factor being useful for the unexpected video call, but for those I’m usually at home or in an office .Battery life is good, but not stellar, and the speaker (the singular speaker on one side of the fold) is also pretty anemic. It doesn’t help that the processor inside is also a last-generation chip, driving two displays rather than one. I suspect this is a big part of the reason why the UI often feels sluggish.

To Microsoft’s credit, many other parts of the device’s hardware are fantastic. The two screens aren’t perfectly calibrated to each other, but close enough to rarely be noticed, and they’re colorful and high-resolution. The device is designs and built extremely well, as a glass-and-metal sandwich that’s just a half centimeter thin when unfolded – barely thin enough to have a charging port. It’s also weighted with a good balance, so it’s comfortable for me to hold it in any orientation I need.

To me, the foldable form factor and the slightly wider screens, combined with the lack of an outside screen, make the device feel less like an overpowered phone and more like a pocketable computer or a true digital notebook. One that respects my focus when I don’t have it open, and gives me space to jot down ideas and doodle when I want to capture something while I’m on the go. It’s also slowly but surely becoming an important part of my incremental note-taking workflow – many conversations, ideas, and inspirations from readings get written down first on the Duo these days, and then get moved into their right place in my notes.

Despite its flaws, the fun I’m having while reading and writing with this foldable pocket computer, and the promise of things that are possible when these technical kinks are fixed, makes me really excited about keeping Surface Duo around in my pocket for the foreseeable future.