Of everything I’ve made in the last decade, my two most favorite projects are, without a doubt, Sounds from Places and A Piano and You. They’re two of the least technically complex, but I think also the most innately empathetic – they deliver an idea or a feeling.

I’ve spent the better part of my last two weeks in self-quarantine indulging my creative side, playing more piano, picking up the guitar again, and getting back into drawing. I’ve also been coding still, but far less than usual. 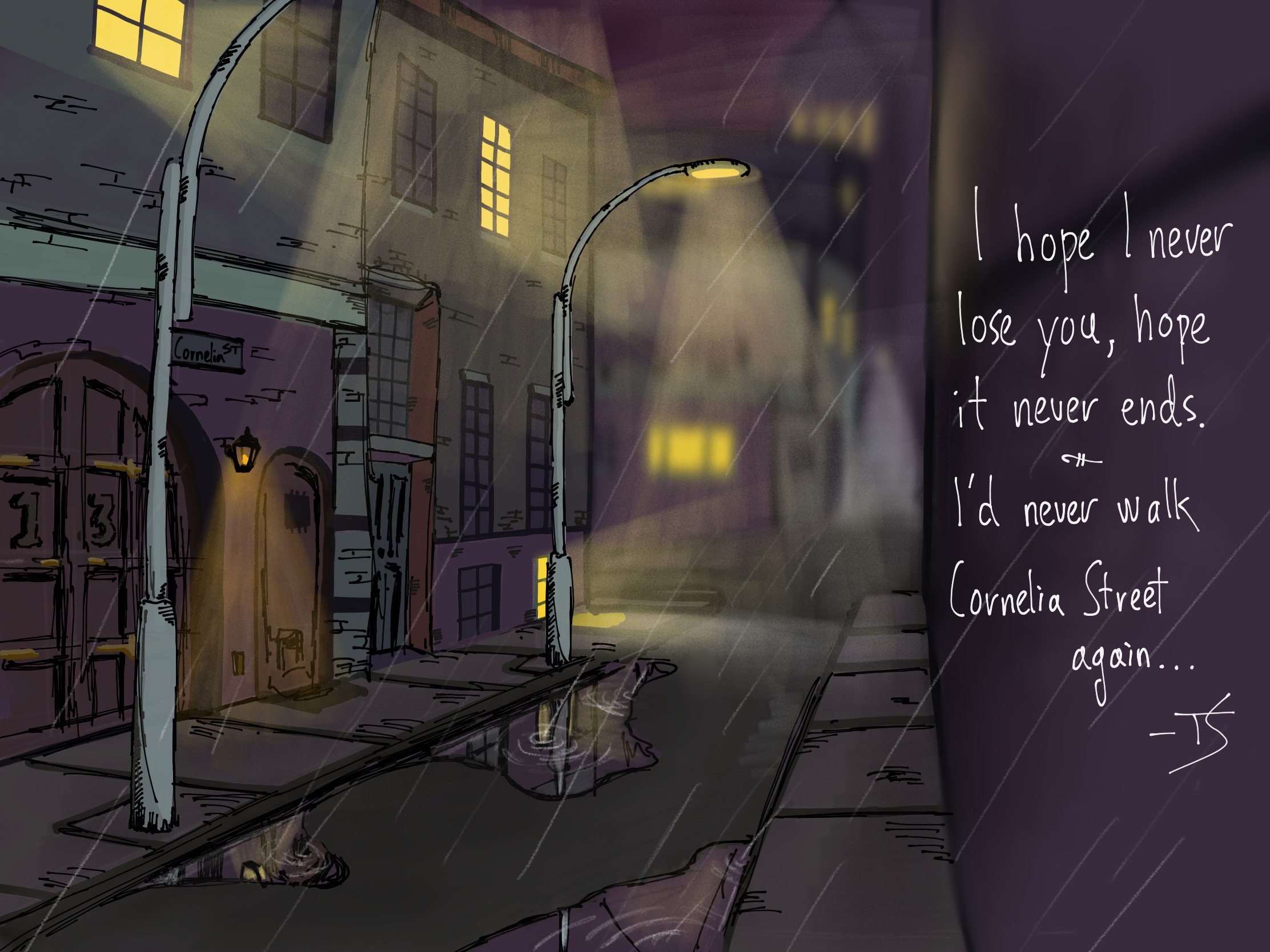 These words are lines from the song “Cornelia Street,” by – who else? – Taylor Swift, the queen of pop songwriting. 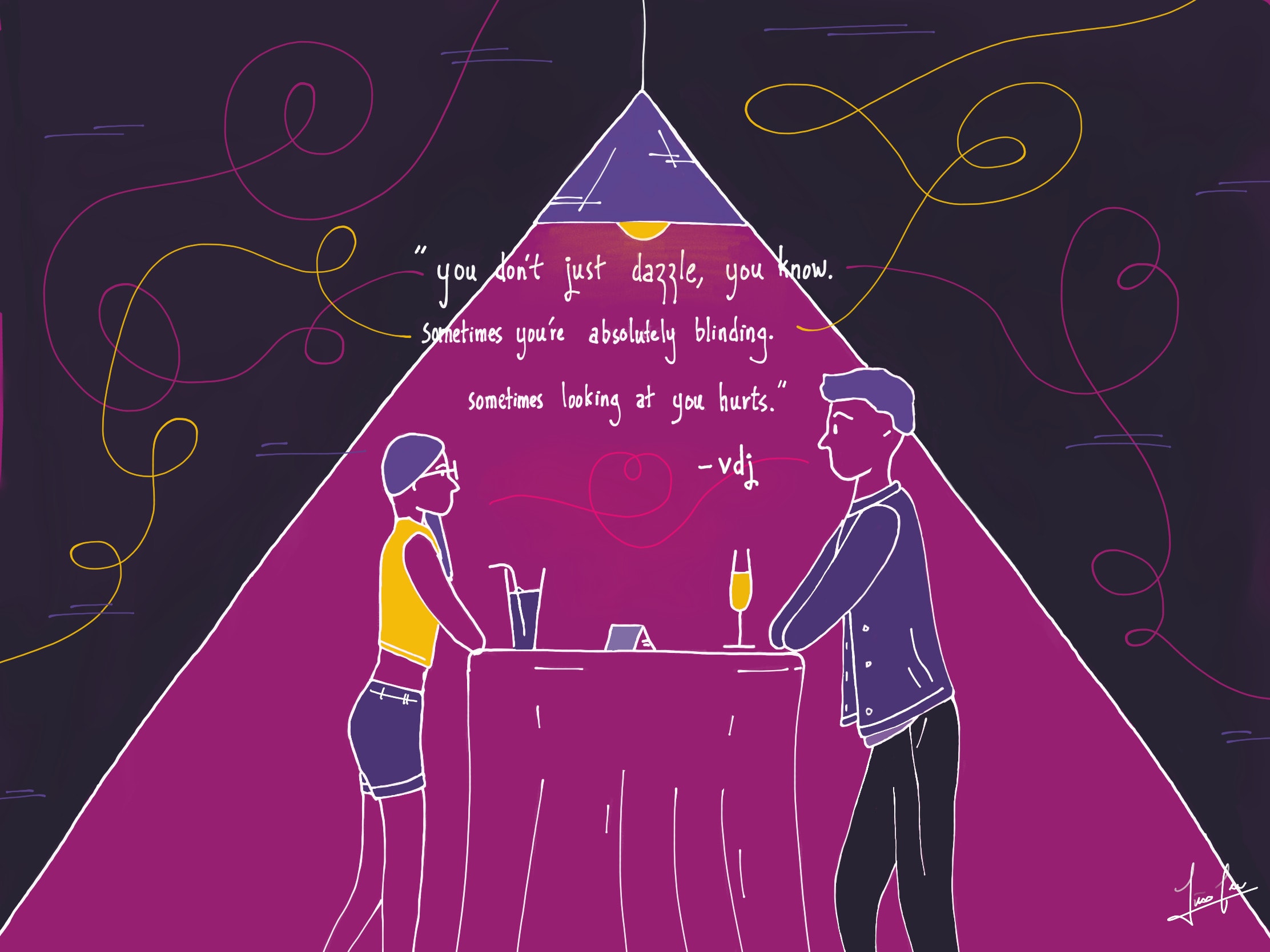 These words are from my friend Van, and the scene is inspired by Someone Great.

Pure unbridled creative energy is hard to come by for me, because creativity requires some inversion of control in how I spend my time. When I’m writing code, I know what I’m building, and perhaps even how. I just need to write the thing. When I’m in front of a blank canvas or at a quiet piano, I don’t really know what the end product is going to look like. I just… start, and whatever unfolds, unfolds in front of me.

Fortunately, over the last three weeks, I’ve had more time to myself, fewer things to do, and more liberty in what I do with that time. And with those many extra hours, I find myself with more freedom for artistic experiments, where I’m driven much more by what ideas strike the right chords in my mind than by what skills I want to sharpen up, or what interesting technologies I’ve just read about. Even more than usual, I’m making projects I just think I would appreciate in the world.

And that’s got me thinking.

The first of my favorite projects, Sounds from Places, is just a collection of one-minute-long audio clips from different places I’ve visited around the world. I love lingering in nostalgia of the places I’ve been, and photographs are useful for that, but there’s something missing from still photos, or even video clips – just the feeling of being there. The closest simulacrum I’ve found is to close my eyes and wrap myself in the ambient sounds that once surrounded me in that moment. So starting sometime in 2017, I started collecting soundscapes from places I’ve visited, from a gentrifying neighborhood in Pittsburgh to the North Atlantic waves crashing into a lighthouse in Iceland, to a busy sushi restaurant in Malibu.

When I shared this with the world, so many more people loved it than I expected. It took me just a few hours to build the website, and isn’t anything technically interesting. But Sounds from Places captured people’s minds in a way none of my projects had before. People asked me about my trips abroad, about why I recorded certain clips, what I was doing. They wanted to collect and add sounds of their own. It felt like something special, especially because it’s just a bundle of HTML and CSS under the hood.

Much more recently, I made A Piano and You, from a piece of prose my friend Van sent me one morning. This one was even simpler to implement, just a single webpage and a script I put together in a short afternoon. But this one simple page resonated with people more deeply than anything else I’d written or designed or built before. Another anomaly.

Ironically to a technologist, the complexity of a project didn’t correlate much at all with how people felt about it.

Ben Brame was one of my bosses at my first real job (writing software at Spensa) and one of my first informal mentors. When we last met over the holidays, he asked me a question I still think about regularly. I don’t remember his words exactly, but in effect, he asked:

Some people like to scale ideas. They take an opportunity or product, build something that works well, and then spend their attention bringing that idea to everyone they can. On the other side of the spectrum are artisans. Artisans care more about craftsmanship, about building things that are perhaps smaller or more niche, but also prioritize building a fine object of craft over delivering that object to everyone in the world. Which do you think you’re closer to?

I used to be firmly in the Scalers camp. That’s why I moved to the Valley, why I enjoy being around founders and entrepreneurs, and why the biggest ideas I’m thinking about now are about how to bring that community to the rest of the world. But I’m starting to see more of myself in the second group, the Artisans.

The projects I’ve built that I cherish the most aren’t about scale or growth or reach. I love them for the fact that they delivered something to someone else – some other human – that I couldn’t do any other way. I’m still searching for the right words, but it’s almost as if the project was just some necessary vehicle for an idea or a feeling I wanted to place in someone else’s life. And when it worked, it just clicked. These projects were more objects of art than pieces of software in that way. And more and more, I’m enjoying creating projects that are effective vehicles for feelings and empathy and beautiful experiences, over containers of value or productivity.

I want to build more projects like these, that deliver a feeling or an experience, not just utility. I love to be moved by artifacts of great artisanship, and I long to bring the same to you, through whatever I build next.

← When the quarantine ends